InfoPath is back in SharePoint 2016 & FoSL vNext is dead!

Last Friday afternoon, the SharePoint team at Microsoft made a few interesting changes on their blog about the future of Forms on SharePoint Lists (FoSL).

For some history on the subject, on January 31st 2014, Microsoft posted a blog post titled “Update on InfoPath and SharePoint Forms” in which they announced that InfoPath 2013 will be the last version of InfoPath, and they are currently working on a new version of FoSL for both SharePoint Server & Office 365. They promised an update at the SharePoint Conference 2014 in Vegas, and they delivered. Microsoft presented Session number SPC348 at SPC that showed us a new way of editing FoSL directly online! If you want to look at the session, you can find it here: SPC348: Update on InfoPath and SharePoint Forms

Fast forward to February 6th, 2015 and after 8 months without any news, Microsoft updated their blog post to include the following:

The InfoPath 2013 application remains the last version to be released and will work with SharePoint Server 2016.” 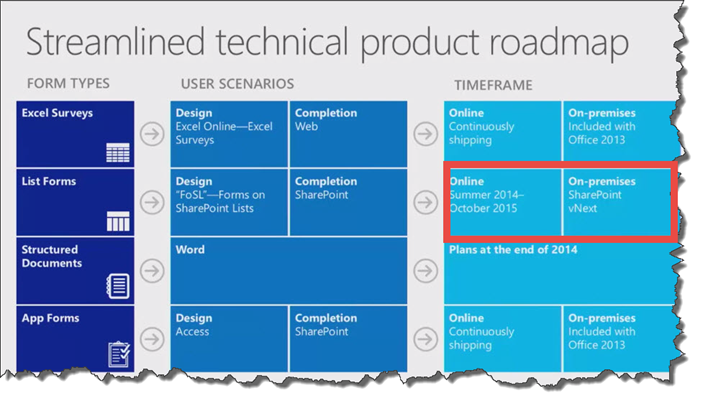 Those SharePointers were actually quite right, however it might be worse than they expected. In a less mediatized change on Friday, Microsoft did a huge change to their Office 365 Roadmap site. The Forms on SharePoint Lists moved from “In development” to “Cancelled”

According to the roadmap, cancelled means: “Previously planned updates that are no longer being developed or are indefinitely delayed“. So while that doesn’t mean InfoPath 2013 will still be  only option to edit forms until 2023, it does mean that a new version of FoSL will probably never arrive in SharePoint Server 2016, and we probably won’t see it in Office 365 in 2015.

Furthermore, for now, there are no sessions on FoSL on the Microsoft Ignite 2015 conference website, so that adds to the rumor that there is no planned release on anything new. (The only session about Forms in SharePoint only shows up because of the word “platforms”)

If you are curious to know how FoSL vNext was supposed to look like, here are some screenshots from SPC348.

Dual InfoPath and FoSL vNext on the ribbon:

The new “Edit Form” view, directly in the browser:

Moving stuff around in the form, as easy as drag & drop

So, even if there was an InfoPath Funeral at SPC14, InfoPath is now back from the dead and will probably be the only way to customize Forms on SharePoint Lists in SharePoint 2016. I really hope we will be able to learn more at the Microsoft Ignite conference this year in Chicago. Meanwhile, if you’re looking for an InfoPath alternative that works with any version of SharePoint and uses mobile apps to fill forms, you might take a look at third-party vendors such as Formotus.

Make sure to spread the word about the future of InfoPath on twitter by clicking on the birdie below:

SharePoint Server
Previous Post
Get a free KWizCom Production license by being Canadian
Next Post
The Know It. Prove It. Challenge: Join the 28 day challenge to rock your tech skills