Today I wanted to install a SharePoint 2013 Virtual Machine to try developing some stuff with Visual Studio 2012. Since I didn’t want to develop directly on my big farm, I decided to make a new Virtual Machine with SQL 2012 + SharePoint Server 2013 RTM.

Did a quick look up on Google, but the only people who had the problem were with SharePoint 2013 Preview, and most of them said the .iso was corrupted. However, I knew my iso was fine, since I installed 4 times already with the same iso.  I re-checked the prerequisites, I restarted the server and nothing.

After a few Google searches I found the answer on something that wasn’t SharePoint related, but I decided to give it a try. 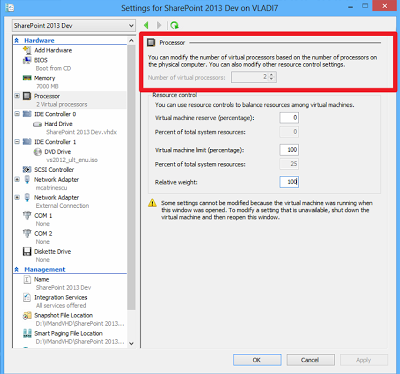 Since I didn’t have this problem with my other Servers, I guess this only happens in Stand Alone mode, or when you have a full SQL installed on the same Server.

Even if, the minimum requirements for SharePoint Server 2013 are a 4-core server and its understandable that it might fail , I still think Microsoft Should make the error messages with a lot more details!