Earlier this year, a vulnerability was found various versions of  SharePoint Server and got assigned the ID CVE-2019-0604. The behaviour of the vulnerability is: 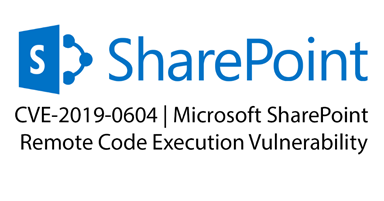 While this patch has been fixed in the latest Public Update, not all administrators patch their SharePoint Servers every month, which caused multiple enterprises to be affected by this vulnerability. On April 23rd , 2019, the Canadian Center for Cyber Security released an alert called China Chopper Malware affecting SharePoint Servers  and here is the assessment from their website:

The Cyber Centre is aware of a campaign that is currently compromising several versions of Microsoft SharePoint Server in order to deploy the China Chopper web shell. Trusted researchers have identified compromised systems belonging to the academic, utility, heavy industry, manufacturing and technology sectors. The following versions of Microsoft SharePoint are known to be affected:

It is likely that the current campaign is leveraging CVE-2019-0604 in order to deploy the web shell. Microsoft released security updates addressing this vulnerability in February and March 2019; however, many systems remain outdated.

A similar alert has been raised by the National Cyber Security Center of Saudi Arabia so this is definetly a vulnerability that addresses international customers.

What should you do?

This is why it’s super important to keep your SharePoint Servers, whether 2010, 2013, 2016 or 2019 on the latest Public Updates in order to keep your environment as safe as possible. In Office 365, Microsoft does it right away, but for On-Premises, it’s our duty as SharePoint Administrators to make sure that we keep the farm secure and keep up with the latest security updates from Microsoft! Therefore, if your farm is not already on the March 2019 Public Update or later, plan an update as soon as possible!