Product analysis by Vlad Catrinescu – requested by KWizCom , but thoughts are my own.

Moving away from paper forms is one of the reasons that companies love SharePoint. SharePoint has the out of the box list forms, as well as InfoPath to help users create custom forms adapted to their business needs. However, InfoPath can be quite complicated for the average business users, and waiting after IT for every from creation can become a bottleneck to deliver business value in SharePoint.

There are numerous third party software out there that do forms in SharePoint on premises, however once you get to the cloud, the choices become a lot more limited. In this blog post we will review the KWizCom Forms app for Office 365 & SharePoint 2013. Here is a small paragraph taken from their website: 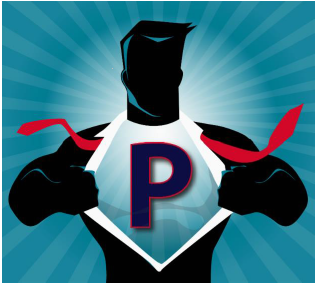 KWizCom Forms app is 100% SharePoint-native. Instead of introducing another proprietary forms designer, we turn your existing list forms into rich, enhanced web & mobile forms! Why is that good? Because all other SharePoint features will keep working inside your KWizCom Forms, and because there’s no need to deploy and teach end-users any new Forms technology!

First, installing the KWizCom forms app is done in two steps, one of them which is easy and the other which is also easy, but requires a bit more permissions. The actual Forms app, can be downloaded directly from the SharePoint Store at the link over here: KWizCom Forms – Free Trial . This is really easy to do, as any other app in the SharePoint store. The part that requires a bit more permissions to setup is adding the “foundation” app. This app has no user interface, it is a utility app, providing services to other KWizCom apps “behind the scenes”. Here is the reason it exists, taken from the KWizCom site.

Why do we need it?

Instead of implementing the same capabilities in each of our apps, we gather all of these shared functions into a “utility app” that can then serve all apps. The result is smaller and faster apps, easier deployment process for our customers.

You will need to install this directly in the app catalog, so you need to have access to that site. You can find all the instructions to do at this link: http://www.kwizcom.com/sharepoint-apps/kwizcom-apps-foundation/overview/ . After everything is installed, end users can manage forms directly from the ribbon in the list that they are in.

Once you click on the button, you go to the KWizCom Forms “Dashboard” for your list. As you see, all those settings are available, except Repeating Rows, which requires you to install a separate app in order to have access to it. 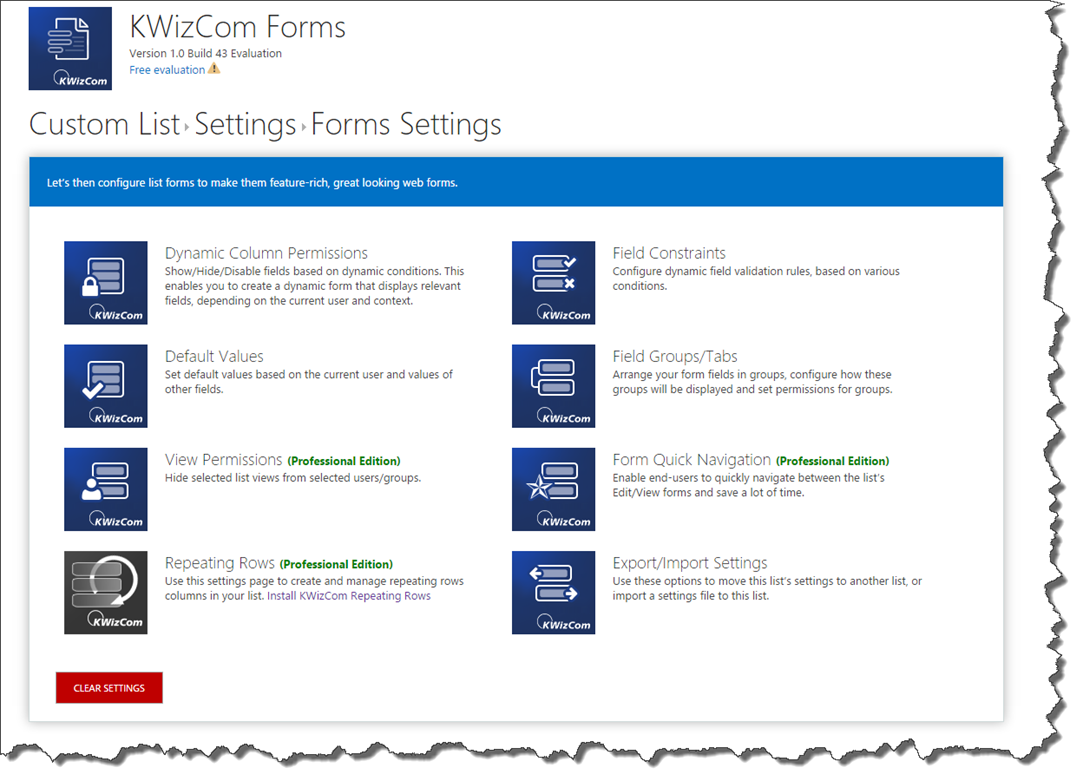 Let’s look at each of those features more in detail and see what they have to offer. First, Dynamic Column Permissions. The Dynamic column permission allows you to Show, Hide or Disable fields in list forms and views, based on logical conditions. This enables implementing dynamic forms where fields appear/become active according to the current context and user input.
First I created a rule to hide the “Priority” column to users who are not in the Helpdesk Owners group. The rules are very easy to create with the built in wizard that doesn’t really let you get them wrong. Here is the rule I created. 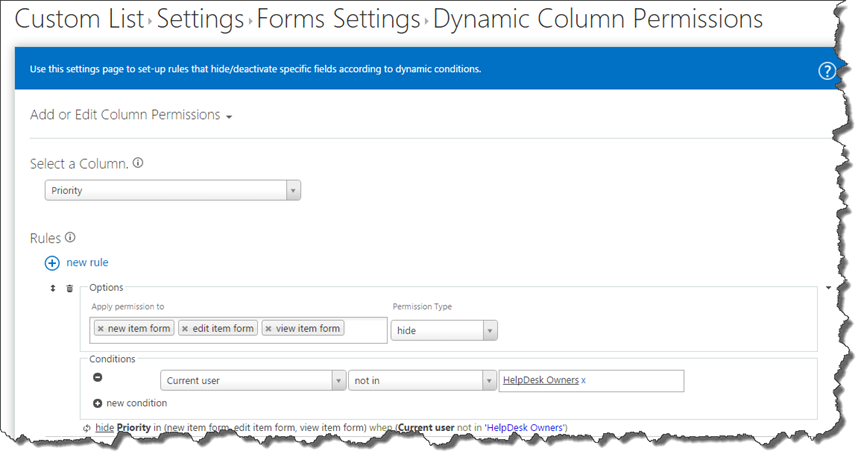 The result? With one account I could see the “Priority” Field, but not with the other that wasn’t in the group! Furthermore, with KWizCom we can also hide or disable columns directly in the Quick Edit View!

Something that we can do that is a bit more advanced, and offers more business value is a dynamic rule that allows us to show certain fields, depending on choices we make in the form itself. So if we have a list with the following three dropdowns, but we want to either show “Hardware type” or “software type” depending on the category, but not both at the same time.

The result is really cool!

Now, let’s talk about Default Values. This feature is pretty self-explanatory; it allows you to set a default value for a field. What it’s cool about KWizCom vs the Out of the Box default values, is that you can dynamically set different values depending on the user that opens the New Item form. Furthermore, you can build simple rules that can make your SharePoint so much better like a rule that Document Title = Document Name!


It automatically detects the type of column, so my choice column was presented the three available choices. KWizCom also supports columns that SharePoint cannot offer a default value for, such as Lookup & Person! 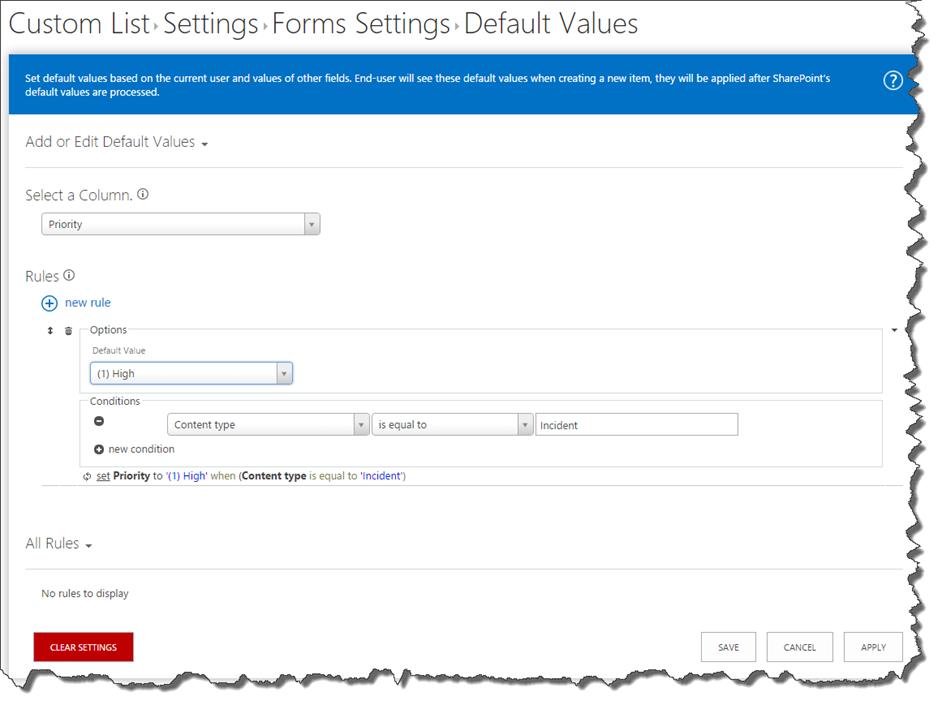 You also have choices depending on the column, for example you can set a People Picker column to default to [Me], which will use the current user as default value. Some more advanced example would be setting a Due Date dynamically by calculating “[Due Date] = [Start Date]+3” 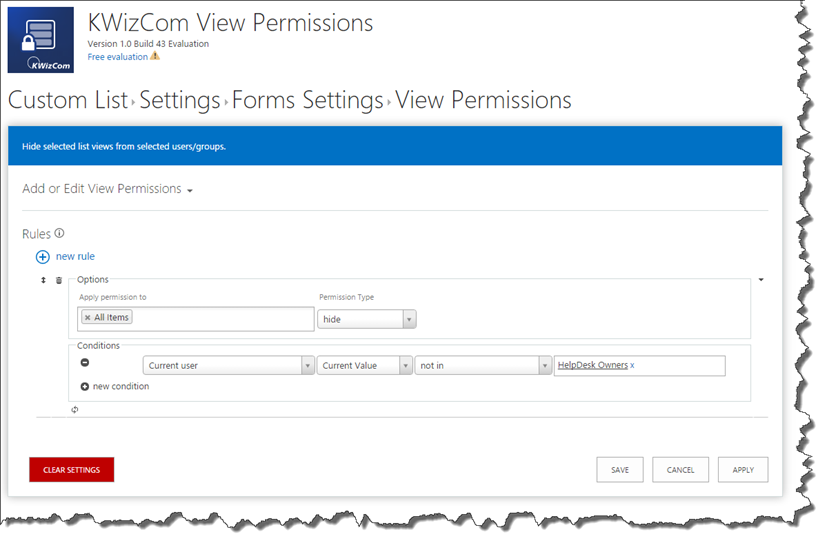 The next feature is Field Constraints. Field constraints allows you to create field validation, before the item is even saved. For example, imagine a company that has a requirement that all incidents have “High” in the incident title if the priority is high. You could easily make sure that they are all following company standards by implementing a small rule. 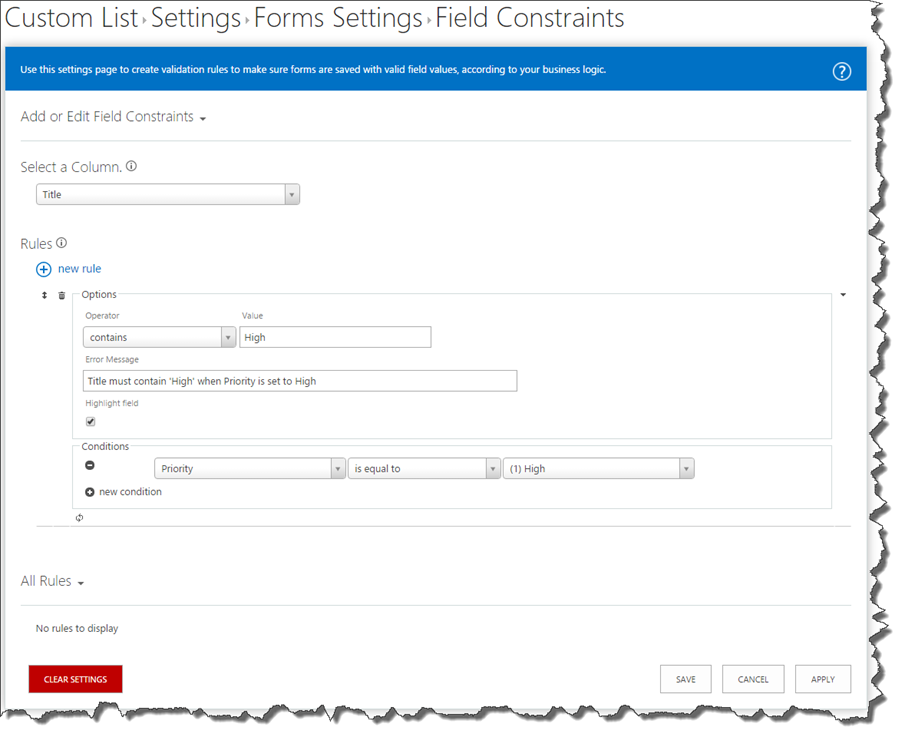 Here is the result

However, SharePoint out of the box already has field validation, however what makes KWizCom Forms special, is the ability to make those dynamic. For example, in a bug list, we could be able to put a rule so that no one from the support group, would be able to close a bug, without entering the resolution. The rule would look something like this:

If [Current user] IN “Support group” AND “Issue Status” = “Closed” then


Validate that “Resolution” is not empty.


If you’re looking for more advanced validation, you can also use patterns! 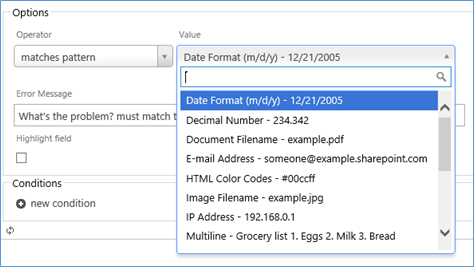 Next feature we have is Field Groups. Field Groups allow us to create really modern looking forms, and only show limited amount of information in the same view of an item. For example, instead of having Title, Priority and Assigned to on the same “window”, I created two Field Groups, and put the Title and Priority on the first one, and assigned to on the second one. Here is the first group. I love the fact on how easy KWizCom made it to create those groups using + and – signs!

We can also make more advanced looking forms by having “multi-column” layout, which makes the forms look better at the same time as making them a lot shorter. 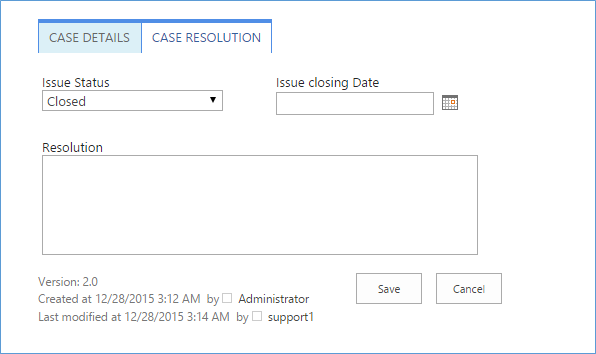 The Form Quick Navigation feature makes a “Previous” and “Next” (You can customize the text) buttons appear directly in the form when users view or even edit items. The benefit is that, instead of having to open one item at a time, save it, and open the next one, by using the Previous and next Button, we could move from one item to another, without reloading the page 3 times. If you had to approve, or even view 30-40 items in a list per month, instead of Open > Edit > Save > Open again, you could directly click the next and previous buttons to make all the changes you need.

Here are the buttons on the item. As you see in the previous screen, right now I only have it on the “View Item Form”, but I could also easily add the same buttons on the “Edit” form.

Another functionality that I really found useful with KWizCom Forms is the ability to export and import the settings. This allows users to create a prototype in QA, and after it’s approved, easily move it to production. You can also move the same settings to another list in the same site, or in a completely different tenant. You simply copy the settings provided, and save it into a .txt file! To import them, you browse to the file and Upload it! It’s that simple!

Now, let’s talk about some cool add-ons that come with the KWizCom Forms App Pro Edition. Those features are the Repeating Rows and Cascading
LookApp. The Cascading LookApp allows us to create, cascading lookups such as Country > State > City, while only showing available choices. The Repeating Row is an interesting feature similar to InfoPath repeating section that allows you to create multi-row forms.

To put all this in a real life scenario, imagine a department expense report. At the top, we would use the Cascading LookApp to allow our user to add the Branch, and Department, while filtering departments available only at that branch. We then use the Repeating Rows feature to record the expense details, with users being able to adding as many rows as they need in the form. 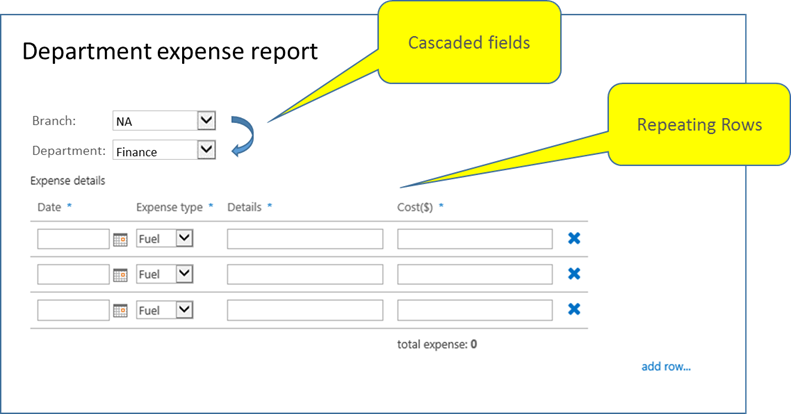 I really enjoyed playing with the KWizCom Forms for Office 365 app, and the thing that I liked the most about the app is that it’s really easy to use. When companies buy a third party application either for SharePoint on premises, or for Office 365, the goal is to get more functionalities, that are also easy to use. Microsoft does offer InfoPath, which is a great tool for customizing forms, however the problem with InfoPath is that it’s very complicated. The fact that you have job postings out there for InfoPath experts, already tells you that while InfoPath is powerful, it’s not easy to get all those features working.

With KWizCom any end-user that knows the basics of SharePoint, can implement dynamic forms with advanced features, without being a forms expert and without advanced training. If you’re looking for a powerful and easy forms app for Office 365, make sure you try the KWizCom Forms App!

Check out the following links to find more information about the KWizCom Forms App: